VR Tourism News - The Only VR Newsletter for the Travel Industry

Note from the Editor:

“When digital and physical worlds collide, it changes everything. “

So begins this wonderful article showcasing the power of augmented reality as it exists today.  Actually, we think it’s so good that we’re dedicating this month’s issue to it.  Not only does it showcase a wide range of applications that can be used in our industry, it goes a long way in explaining how it works as well. Read. Wonder. We promise that you WILL be inspired!

With emerging tech like augmented reality, businesses can leverage a new way to connect with customers. Creating content that is exciting to users makes for an unforgettable experience that is sure to get them talking and coming back for more.

The following 13 examples of augmented reality experiences are sure to get you on your way to dreaming up your next big venture.

1. Sandbox -This augmented reality sandbox developed by UC Davis uses projection-based AR to create a more hands-on learning environment. This innovation uses a Microsoft Kinect 3D camera, visualization software, and a projector. The sandbox simulates a map in real-time to allow users to create topography models by moving and shaping real sand inside the box. 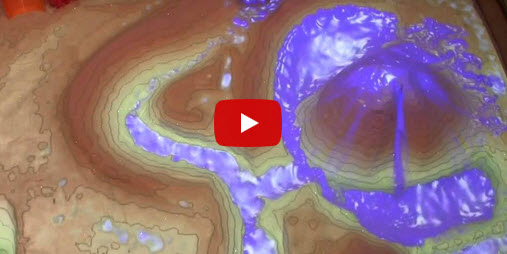 The different elevations are shown by color, along with contour lines. Even virtual water can be incorporated into the sandbox. When a hand is placed above the augmented reality sandbox in line with the projector, it simulates a cloud. Rain starts to fall and fill up the low spots, just as it would in a real landscape.

As the advertisement above shows, all you have to do is simply place the physical catalog where you want to put your new sofa or armchair. This is what’s called marker-based AR, which uses a physical marker (the catalog) to trigger the digital content.

Augmented reality business cards allow room for more information – like your personal portfolio site. Some even let you implement a voice-over to go along with the digital content.

4. Out of home advertising -This augmented reality experience doesn’t require users to take the extra step to pull out their camera. Pepsi went for shock factor and they got it with this campaign.
Pepsi’s “Unbelievable” ad campaign captured the attention of patrons and kept them engaged. How many advertisements can you say that about? 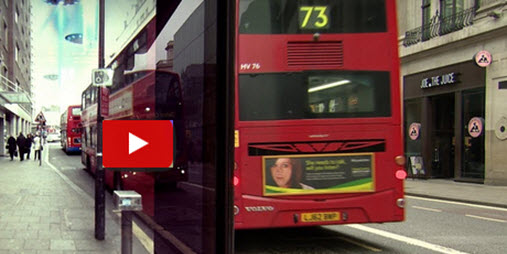 I would definitely miss my bus.

5. Packaging - Augmented reality can be used to tell a story about your brand. And, ideally, it gets people talking about it. When 19 Crimes wine hit the shelves, the physical label itself was already jarring to the average customer just perusing the aisles.

The video went viral when a video online showed the talking characters on the bottle. Using the brand’s app, each wine variation features a different criminal with their own unique story. As a true crime junkie and a fan of wine, I’ll definitely be trying them all. They certainly know their target audience.

6. Menu - Imagine seeing what the food looks like before actually ordering it. With an augmented reality menu, you can swipe through the entire selection before deciding what to have.

This application of AR technology opens up a lot of avenues for similar businesses in the service industry to go the extra mile for their customers. For example, nail salons could show their clients color and style options before having to make a choice.

7. Books - Kids already have wild imaginations, but now stories really can jump off the pages. There are a number of augmented reality children’s books that offer virtual content on top of each page. All of the virtual animation and content is predetermined per page.

But, what if what was on the page changed? With coloring books, there are no rules – except, of course, color inside the lines. This technology by Disney shows the little Picasso what they are drawing in 3D by synthesizing exactly what is on the paper in real-time.

8. Museum -This augmented reality exhibit at the Smithsonian shows museum-goers what they’ve never seen before – dinosaurs! This AR exhibit brings the extinct back to life to put visitors at the center of it all.

We’ve all read about dinosaurs and seen drawings of them. But aside from Jurassic Park, we’ve obviously never seen one, let alone interacted with one.

Using an AR app, users can see the images as videos, including the advertisements at the bottom of the page.

10. Tourism - Your phone is your most dependable tour guide as you search for restaurants and translating your questions to locals. There are a lot of different ways that augmented reality can be used in the travel industry. Google enhanced its popular translate tool by taking removing a step for its users. Say goodbye to copy paste, copy paste.
augmented-reality-example-google-translate.

With Google Translate’s Instant Camera, users can translate the world around them in real-time. Plus, you can save them to your device so that you don’t have to keep translating the same signs over and over again.

11. Architecture - Blueprints give you a general idea of what you can expect in a new space and 3D models are used to convey that message even further. When AR is used these two concepts can be combined.

In this video, we see the physical building plans with digital structures built right on top. There’s even a timeline portion of this presentation that shows what floors of the building will be completed by a set date.

12. Military - The US Army is experimenting with augmented reality technology to give soldiers better spatial awareness. The AR glasses are wirelessly connected to a tablet that soldiers wear around their waist.

This simulation looks a lot like a video game with the maps pulled up, but it’s expected to be incredibly helpful when soldiers are unfamiliar with their surroundings. The technology is not available to the troops yet, but it’s coming soon.

13. Mirror - Another retail application of augmented reality, this mirror lets users virtually try on clothes. While I don’t know that the physical process trying things on will be totally eliminated, it certainly cuts down on the number of items you take to the fitting room.

It’s safe to say that Cher Horowitz’s closet outfit matching program from the popular 1995 movie Clueless is getting an upgrade.

The possibilities are endless - As these 13 examples have shown you, there are limitless applications for augmented reality tech just waiting to be uncovered. My advice: push the boundaries.

If you’ve already had the “aha!” moment, but aren’t exactly sure which software you need to pull it off, start with these categories.

About the Author -Bridget Poetker is a senior content marketing specialist at G2, focusing on app development and design. Born and raised in the Chicago area, she graduated from the University of Illinois at Urbana-Champaign. I-L-L! In her free time, you'll find Bridget in the bleachers at Wrigley Field or posted up at the nearest rooftop patio. During the 8 months of Chicago winter, she hibernates.